Ras Al Khaimah Courts (RAK Courts) and Abu Dhabi Global MarketCourts (ADGM Courts) have signed a Memorandum of Understanding (MoU) for the reciprocal enforcement of their judgments, decisions and orders, and the arbitral awards recognised by them. The MoU was signed by H.E. Ahmed Mohammed Al-Khattari, Chairman of Ras Al Khaimah Courts Department and Lord Hope of Craighead KT, Chief Justice of ADGM Courts in the presence of H.E. Ahmed Ali Al Sayegh, Minister of State (UAE) and Chairman of Abu Dhabi Global Market. 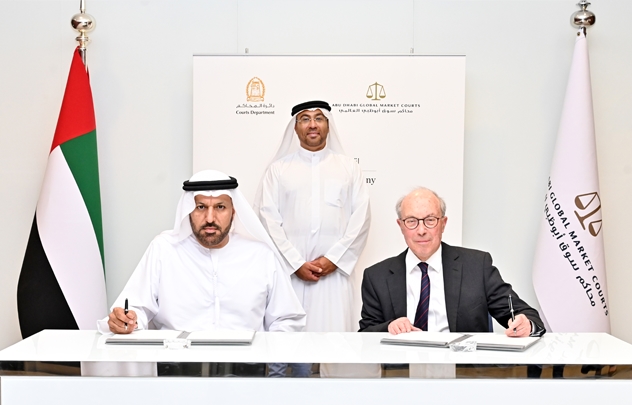 RAK Courts and ADGM Courts share a mutual goal and commitment to delivering internationally-aligned judicial services that ensure timely, simplified and effective procedures for the reciprocal enforcement of judgments, decisions and orders, including arbitral awards. This further collaboration follows the signing of their first memorandum of understanding on legal and judicial endeavours in November 2017. They propose to continue their engagement on all judicial matters, and particularly regarding the use of technology to assist in the enforcement of judgments, ensuring their continued delivery of outstanding judicial services for the benefit of the whole of the United Arab Emirates.

H.E Ahmed Mohammed Al-Khattari, Chairman of Ras Al Khaimah Courts Department, said: “RAKCourts is continuously seeking to further its cooperation with ADGM Courts which is known for its unique world-class judicial services. This MoU will enhance the trust and confidence of users and ensure efficient delivery of services.”

The Right Honourable Lord David Hope of Craighead KT, Chief Justice of ADGM Courts, said: “Weare particularly pleased to further our relationship with RAK Courts through this additional MoU on the enforcement of our courts’ judgments. ADGM Courts strongly believe that the widening and strengthening of their enforcement framework across the UAE will serve to increase the local and global community’s confidence in the UAE judicial system and, in turn, bolster the growth of the economy through more investment and trade. I am very grateful to His Excellency for this collaboration and I look forward to our continued engagement.”

ADGM Courts, the latest and most progressive judicial framework in the Middle East, are one of three world-class and independent authorities under ADGM supporting Abu Dhabi’s commitment to providing an innovative, efficient and dynamic business environment that fosters continuous economic growth. ADGM is the first jurisdiction in the Middle East that directly applies the well-established and internationally accepted principles of English common law.

As an integral member of Abu Dhabi’s judicial system, ADGM Courts continue to establish strategic relationships for local and international judicial cooperation to advocate and uphold the highest level of international practice. ADGM Courts’ collaborations include Abu Dhabi Judicial Department, the UAE Ministry of Justice, Ras Al Khaimah Courts, the Commercial Court, Queen’s Bench Division, England and Wales, the High Court of the Hong Kong Special Administrative Region of the People’s Republic Of China, the Supreme Court of New South Wales, the Federal Court of Australia, the Supreme Court of the Republic of Singapore. For more updates and information of ADGM Courts, please visit here.

Since its inception, ADGM has been awarded the “Financial Centre of the Year (MENA)” for three consecutive years for its initiatives and contributions to the financial and capital markets industry in the region.