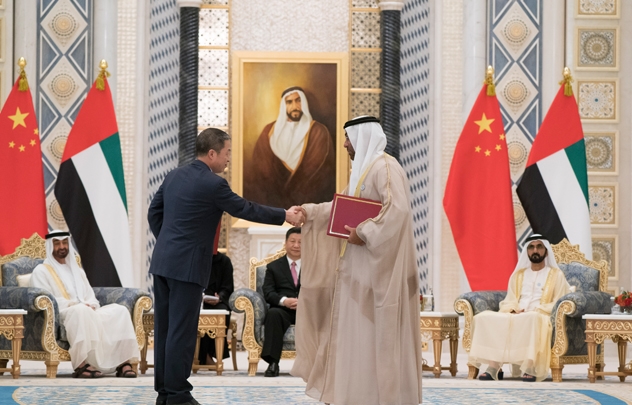 Abu Dhabi Global Market (ADGM), the international financial centre of Abu Dhabi, is pleased to approve the first Chinese state-owned financial services firm to be established in ADGM to provide strategic investment and financial support to Chinese enterprises as part of the Belt-and-Road initiative. This follows from the signing of the framework agreement between the China-UAE Industrial Capacity Co-operation Demonstration Zone* ('the Demonstration Zone' led by the Jiangsu Provincial Government) and ADGM to further strengthen the China-UAE economic ties and advance mutually beneficial collaborations. The agreement was exchanged in the presence of Mr Xi Jinping, President of the People's Republic of China and His Highness Sheikh Mohammed bin Zayed Al Nahyan, Crown Prince of Abu Dhabi and Deputy Supreme Commander of the UAE Armed Forces, at the Crown Prince's Court during the state visit by the Chinese State Leader and his Ministerial delegation to Abu Dhabi. The agreement was signed by Mr Bin WANG, Chairman of China Jiangsu International and H.E Ahmed Al Sayegh, Chairman of ADGM in Abu Dhabi.
The state-owned financial services firm, known as the Industrial Capacity Co-Operation Financial Group Limited (ICCFG), is the first of such Chinese financial services firm to be approved by the Financial Services Regulatory Authority of ADGM, to conduct the regulated activities of providing and arranging credit via the ADGM platform.

The ICCFG will play a critical role in promoting the Demonstration Zone and providing efficient lending facilities to support the investment and financial needs of Chinese enterprises established in the Zone located in the Khalifa Industrial Zone of Abu Dhabi (KIZAD). The ICCFG in ADGM aims to:

- offer a comprehensive suite of financial services to support the Demonstration Zone, Belt-and-Road initiative, and Chinese companies expanding in the region;
- serve as a platform to support the internationalisation of Renminbi for investment and financial projects in the Demonstration Zone
HE Ahmed Al Sayegh, Chairman of ADGM said: "Strategically located along the Belt and Road corridor, Abu Dhabi, as the capital of the UAE, is a natural link to fast developing economies of Middle East and Africa region, the Indian Subcontinent, Southeast Asia and Greater China.  As part of Abu Dhabi's economic blueprint, ADGM is honoured to be able to contribute constructively towards the Belt and Road initiative and work closely with our Chinese partners in fulfilling their business goals. The ICCFG will support the anchoring of more Chinese enterprises in Abu Dhabi seeking commercial opportunities along the Belt and Road route including the MENA region. ADGM remains committed in enhancing the cross-border connectivity and creating new opportunities between the two economies."

Mr Bin Wang, Chairman of China Jiangsu International Group, said: "We are pleased to advance this new cooperation with our important partner, ADGM, and look forward to the operations of the financial services platform by the end of 2018. The Capacity Cooperation Demonstration Zone plays a key bridge between China serves as a vital bridge between China and Abu Dhabi, and it is a vital measure supporting the 'One Belt, One Road' initiative. In the future, we expect about US$2 billion of investment will be managed by this financial services platform to support the Chinese entreprises in the Demonstration Park. With more integrated and comprehensive financial services available, we expect even more Chinese entreprises and companies to establish themselves in the Demonstration Zone, at the same time, to support them in successfully fulfilling their growth and expansion in Abu Dhabi".

The ICCFG intends to scale up its services and presence in other Belt and Road-related industrial capacity zones in the near future. Following the signing of this agreement, ADGM, the Jiangsu Provincial Development and Reform Commission and JOCIC will continue to explore and collaborate on mutually beneficial initiatives to facilitate the co-operation between Abu Dhabi and China.

ADGM and the Demonstration Zone signed their first agreement on financial collaboration at the launch of ADGM China office in Beijing in May 2018.

Abu Dhabi Global Market (ADGM), an international financial centre (IFC) located in the capital city of the United Arab Emirates, opened for business on 21 October 2015. Established by UAE Federal Decree as a broad-based financial centre, ADGM augments Abu Dhabi's position as a global centre for business and finance and serves as a strategic link between the growing economies of the Middle East, Africa and South Asia and the rest of the world.

ADGM's strategy is anchored by Abu Dhabi's key strengths including private banking, wealth management, asset management and financial innovation. Comprising three independent authorities: ADGM Courts, the Financial Services Regulatory Authority and the Registration Authority, ADGM as IFC governs the Al Maryah Island which is a designated financial free zone. It enables registered financial institutions, companies and entities to operate, innovate and success within an international regulatory framework based on Common Law. Since its inception, ADGM has been awarded the "Financial Centre of the Year (MENA)" for two consecutive years for its initiatives and contributions to the financial and capital markets industry in the region.*