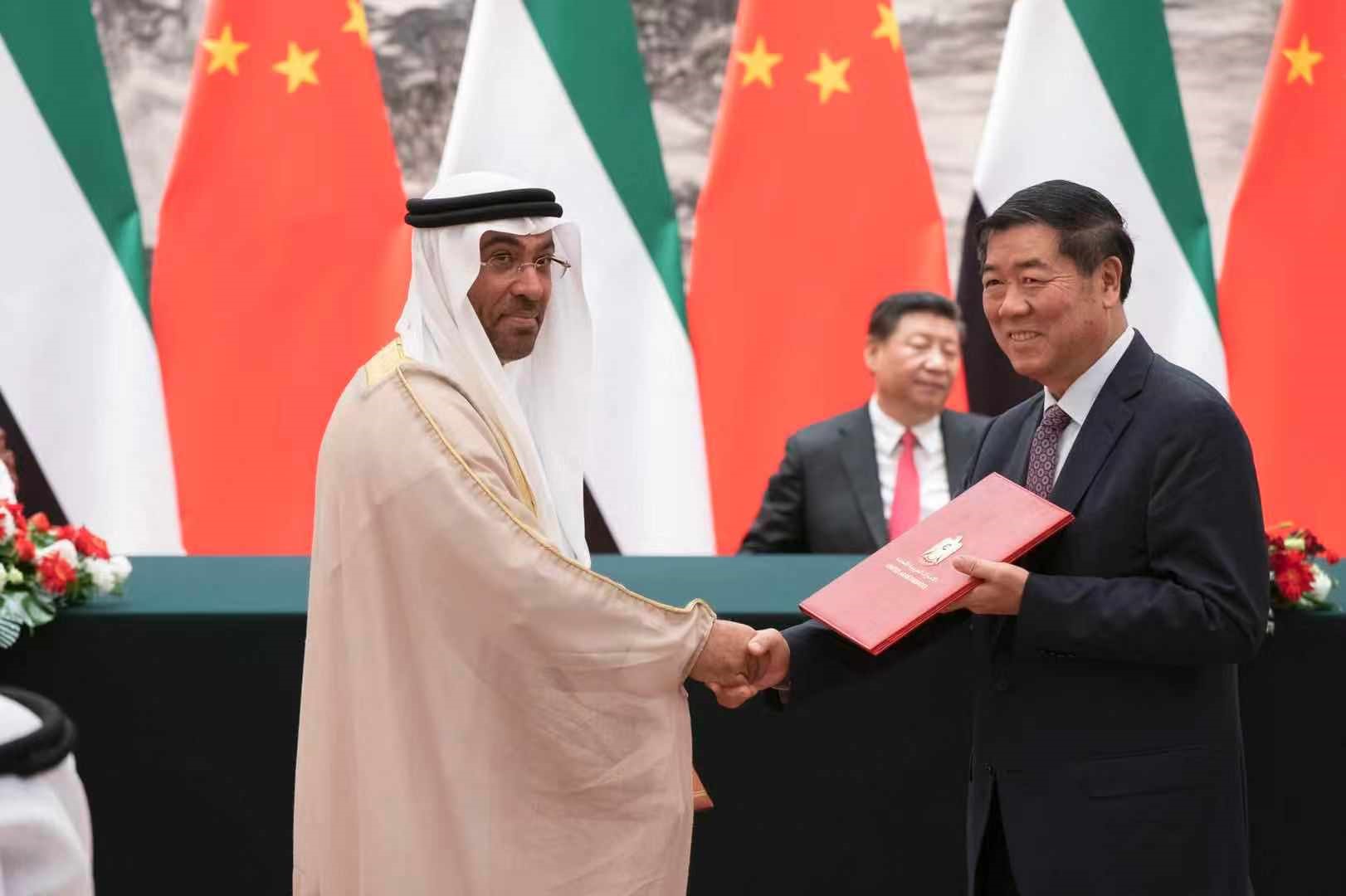 In presence of His Highness Sheikh Mohammed bin Zayed Al Nahyan, Crown Prince of Abu Dhabi and Deputy Supreme Commander of the UAE Armed Forces and Mr Xi Jinping, President of the People’s Republic of China, Abu Dhabi Global Market (ADGM), the International Financial Centre in Abu Dhabi, announced key collaborations and ties with strategic Chinese institutions during the state visit by the Abu Dhabi State Leader and his Ministerial delegation to the People’s Republic of China. The new partnerships and agreements are with the National Development and Reform Commission (NDRC), China National Nuclear Corporation (CNNC), and China Everbright Group.

On the same day at the UAE-China Economic Forum in Beijing, ADGM also entered a new agreement with OneConnect Financial Technology (a subsidiary of Ping An group) to foster greater cross-border FinTech opportunities in support of the Belt-and-Road initiative.

These collaborations demonstrate ADGM’s commitment in reinforcing the positive China-UAE economic ties and supporting mutually sustainable projects between the two countries. These newly inked developments bear testaments to ADGM’s efforts in engaging key Chinese stakeholders since the launch of its China representative office in Beijing slightly over a year ago in May 2018.

H.E Ahmed Ali Al Sayegh, Minister of State (UAE) and Chairman of ADGM, said: “China and the UAE/Abu Dhabi have maintained a deep respect and support of each other for decades. These four collaborations underscore the key industries and sector strengths of both China and Abu Dhabi. As an International Financial Centre and ecosystem enabler, ADGM will continue to create sustainable business and investment opportunities between the two countries and support the development of the Belt-and-Road initiative. We look forward to welcoming and working closely with NDRC, CNNC, China Everbright Group, OneConnect Financial Technology and many more Chinese enterprises to anchor their MENA operations in ADGM and Abu Dhabi.”

Details of the new agreements and partnerships are:

Under the Memorandum of Understanding (MoU), the NDRC and ADGM will jointly encourage and support Chinese and UAE enterprises in establishing their presence in each other’s market and exploring possible investment opportunities. Among the initiatives, NDRC and ADGM plan to explore and establish a Belt-and-Road investment and financing centre that will serve and support major joint projects and initiatives between China and the UAE.

ADGM and CNNC entered into a cooperation agreement to support CNNC’s globalisation plans, include establishing a global treasury, investment and financing centre in ADGM by leveraging on ADGM’s world-class regulatory framework and conducive business environment. Both parties are keen to facilitate Belt-and-Road initiatives in the UAE and MENA region, in addition, to better support the growth ambition of CNNC’s global businesses and companies through this Centre. By anchoring in ADGM, CNNC plans to foster greater collaboration to support the nuclear energy industry and promote the nuclear energy infrastructure and equipment manufacturing globally. The agreement was signed between Mr. Yu Jianfang Chairman of CNNC and H.E. Ahmed Ali Al Sayegh Minister of State (UAE) and Chairman of ADGM.

The CNNC is a leading and one of the largest state-owned enterprises that is managed directly by the central Chinese government. It successfully built the first nuclear power plant in the Chinese mainland and has also established a complete nuclear technology industry framework. CNNC is a key part of the national nuclear technology industry and undertakes the major role of nuclear energy infrastructure construction. In addition, CNNC takes on an important role of promoting economic and social development for China.

China Everbright and ADGM will explore and develop a joint platform that focuses on key areas including real industries development, financial and investments funds and related initiatives, innovation and technology-focused projects and internationalisation of RMB products and services that cater to the advancement and progress of the Belt-and-Road initiative - linking China and the Middle East and Africa region. China Everbright will explore and establish its key representative office in ADGM and work with ADGM in expanding its extensive portfolio of businesses across Abu Dhabi and MENA to better service its customers and stakeholders. The agreement was signed by Mr Li Xiaopeng, Chairman of China Everbright Group and H.E. Ahmed Al Sayegh, Minister of State (UAE) and Chairman of ADGM.

China Everbright Group is one of the largest comprehensive financial shareholding groups in China, with a total asset of over 5 trillion RMB, with 14 listed companies home and abroad. It ranked 322nd among the Fortune Global 500 in 2018. China Everbright Group is endeavoring to build itself into a world-class financial holding group with global competitiveness, and develop a group of outstanding subsidiaries in major areas including wealth management, asset management, investment banking, environmental protection, tourism, healthcare and technological innovation, by utilizing its advantages in comprehensive finance, industry-finance integration and Chinese mainland and Hong Kong collaboration.

To promote the stable development of bilateral trade through e-commerce cooperation, ADGM and OneConnect Financial Technology formed a new partnership to promote FinTech innovation, support ecosystem-enablers and create business opportunities in both China and the UAE. As part of the agreement, both OneConnect and ADGM will assist Chinese FinTech community to tap on ADGM as their platform to develop, test and launch innovative FinTech products, services and business solutions in Abu Dhabi and MENA markets along the Belt-and-Road route.

Strategically located along the Belt and Road corridor, Abu Dhabi, as the capital of the UAE, is a natural link to fast developing economies of Middle East and Africa region, the Indian Subcontinent, Southeast Asia and Greater China. ADGM remains committed in enhancing the cross-border connectivity and creating new opportunities between the two economies.

ADGM is working closely with several major economic hubs in China on various focus and fronts. In addition, the China office has been assisting Chinese companies and Chinese Small and Medium Enterprises (SMEs) that are keen to expand their reach into Abu Dhabi and the MENA region. 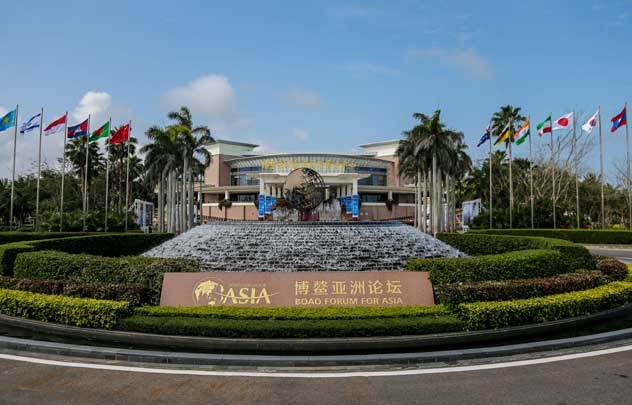 ADGM establishes its 1st representative office in Beijing, capital of the People’s Republic of China 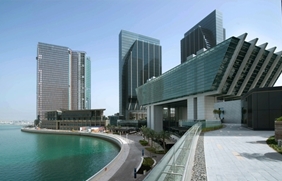