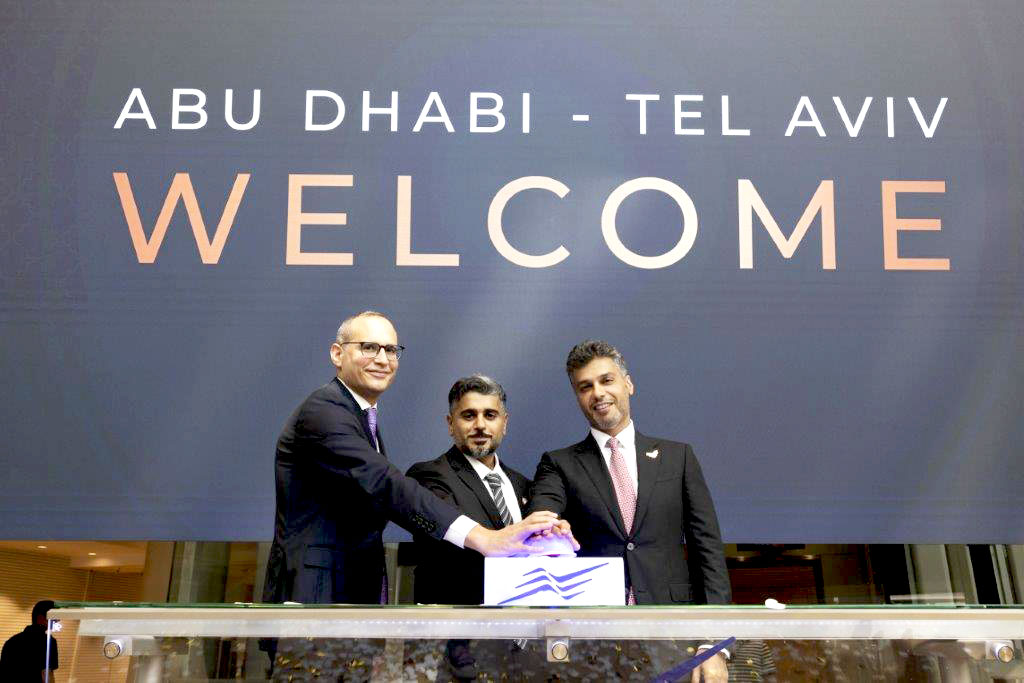 The official delegation from Abu Dhabi arrived in Tel Aviv on Monday, 5th September 2022as part of the initiatives that continue to be developed following the historic Abraham Agreements sealed between the two nations.

Over two days of their visit to Israel, the delegation participated in a joint business forum co-organised by the Tel Aviv Stock Exchange (TASE) and ADGM, the leading international financial centre (IFC) in Abu Dhabi in collaboration with The Embassy of UAE at Israel and witnessed many high-profile business leaders from Israel along with thought leaders and top executives from publicly traded companies, top institutional investors and other capital market participants enriching the networking events and sessions. Conducted with an aim to build on the UAE-Israel economic corridor, the business forum turned out to be a huge success with notable outcomes.

After the successful visit of the TASE delegation to the UAE and ADGM in March 2022, both countries recognised the main pillars for prolific business relations and an official invitation was extended for a joint business forum in Tel Aviv to enable a platform for the continuous establishment of business and strategic connections. These pillars were further strengthened with Memorandums of Understanding (MoUs) signed across mutually beneficial sectors between the two nations this year that concrete the foundations of the economic tie-up. The recent delegation saw the signing of three milestone MoUs on 6th September 2022 to explore and enable various business opportunities in the financial spectrum that promote close and wide partnerships between both jurisdictions. The MoUs were witnessed by H.E Mohamed Al Khaja (UAE Ambassador to Israel) and His Excellency Ahmed Jasim Al Zaabi, Chairman of ADGM.

ADGM and Start-up Nation Central Ltd. (SNC), an Israeli-based organization dedicated to strengthening and connecting the Israeli innovation ecosystem to global opportunities signed an MoU during the business delegation. With both parties working toward reinforcing an innovative ecosystem in their respective nations, the MoU intends to bring them together to strive toward valuable contributions to further developing these ecosystems through diverse initiatives. Business partnerships and collaborations will also be explored to promote opportunities for companies in their respective ecosystems and the opening of their commercial presence in Abu Dhabi and Israel. Inputs on policy and funding may also be exchanged with the same aim along with jointly supporting activities such as events and workshops. 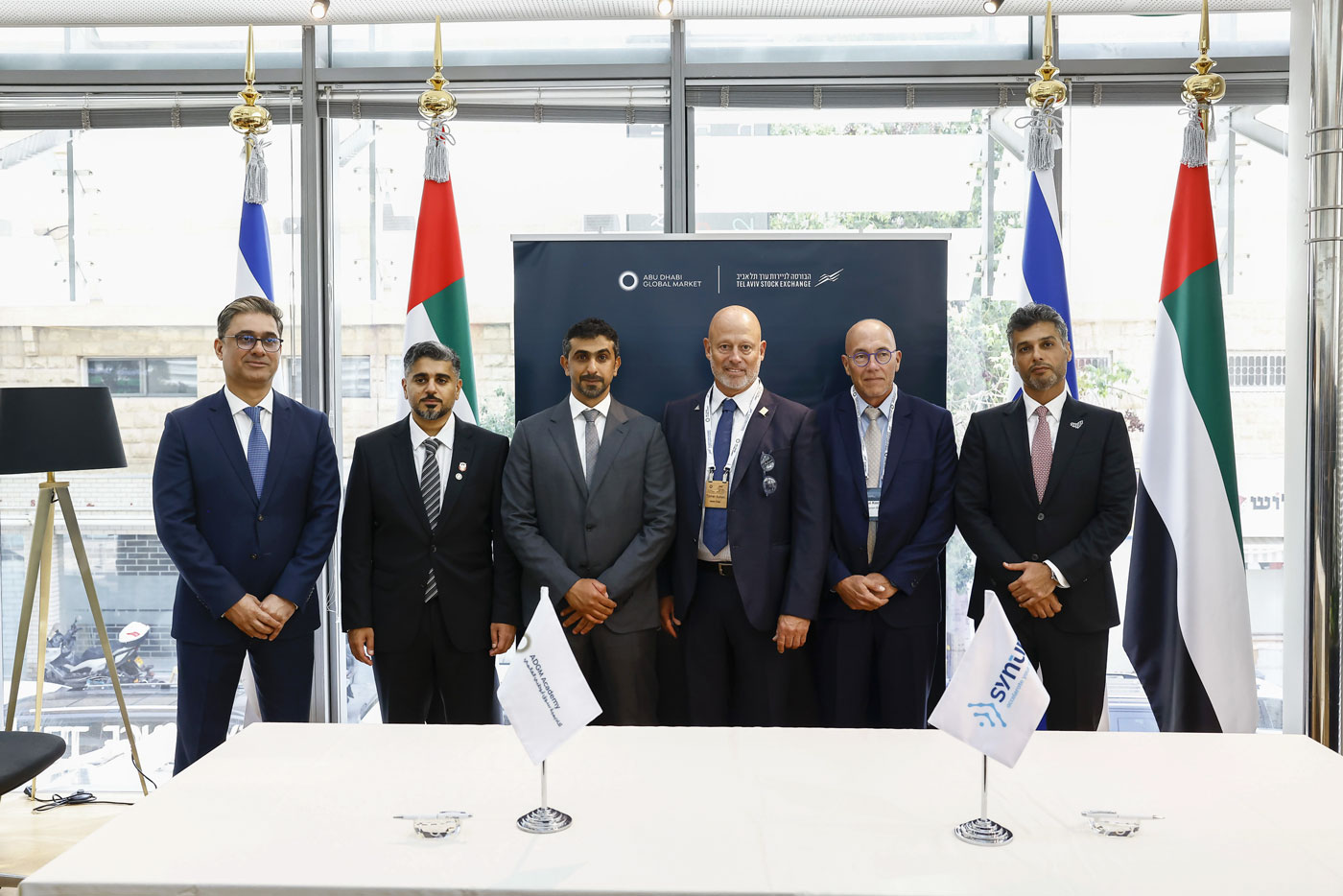 Another MoU signed between ADGM Academy and Avnon Group Middle East was also borne witness to at the delegation. This MoU explores opportunities for their mutual interest in establishing a framework of cooperation and exchange of information related to the development of an ADGM Digital Asset Knowledge Hub focussing on Cybersecurity, AI, Blockchain and more to increase the literacy of Cybersecurity and related areas. The signing parties intend to further develop areas of cooperation by provisioning educational services, upskilling present professionals for future jobs, enabling the creation of entrepreneurs and developing products and services that contribute to the UAE’s knowledge economy.

ADGM Office of Data Protection and The Israeli Privacy Protection Authority (IPPA) inked an MoU to facilitate mutual understanding of the legislative, procedural and information technology frameworks in their respective jurisdictions in the area of data and privacy protection. Other areas to be explored include developing and sharing best practices to assist each Authority in continuously improving the efficiency and effectiveness of the delivery of their functions, exchanging views between the Authorities about matters of common interest and operations-related information on public events taking place in their respective jurisdictions and provisioning mutual training of staff from each Authority.

On this occasion H.E Mohamed Al Khaja, the UAE Ambassador to the State of Israel said: "I hope to see the leading companies in both countries build on the strong foundations in place, including our CEPA trade agreement, to cooperate and forge business ties and create fresh ventures reaching new markets.

Ambassador Al Khaja added: "This will in turn create jobs and drive further economic growth for the benefit of all Israelis and Emiratis".

Commenting on the success of the delegation, ADGM Chairman, His Excellency Ahmed Jasim Al Zaabi said, “The delegation to Tel Aviv is a testament to the long-term commitment of Abu Dhabi to foster stronger ties between the two nations and building bridges between Israel and the UAE. With the exploration of abundant business opportunities, the existing UAE-Israel economic corridor has already topped USD 1 billion according to estimates by the UAE-Israel Business Council. The projected growth for 2022 is said to be USD 2 billion.”

He further added, “This delegation, the high-profile networking and the MoUs signed in the forum act as cornerstones to the expected unprecedented growth. We are excited to explore bilateral growth and investment opportunities through the joint efforts of our industry. We are confident that these collaborative efforts will help realise the true potential of the two markets when working together in unison.”

Ittai Ben Zeev, CEO of the Tel Aviv Stock Exchange:: “We must open up the Israeli market to the Eastern Hemisphere as well. Greater diversity of economic relations will place Israel in a better position to counter the rising cost of living. We are dedicated to constantly increasing the number and diversity of investors on the Israeli capital market. The delegation, visiting Israel for the first time, is intended to expose the Abu Dhabi business community to leading Israeli companies listed on TASE. This is an opportunity to familiarize Abu Dhabi officials with the strength of the Israeli economy and expose them to TASE’s prominent sectors".

“Since the signing of the Abraham Accords, Start-Up Nation Central has made nurturing ties with the UAE one of its cornerstone missions. We believe in the potential of innovation to form solid international relations,” said Start-Up Nation Central CEO Avi Hasson. “Combining Israeli technologies with the Emirati innovative and entrepreneurial mindset, as strongly supported by ADGM, can further entrench business ties and though those deepen the people-to-people ties that form the foundation of bilateral relations.“

Eng. Abdulla Abdul Aziz AlShamsi, Acting Director General of ADIO, said: “The Abu Dhabi delegation to Tel Aviv represents a significant and meaningful development in the rapidly advancing relations between our two markets, which have seen strong progress since the Abraham Accords, particularly in the areas of advanced technology and innovation. The visit showcased the depth of knowledge and strength of ambition in Israel’s business ecosystem, and has cemented our conviction of the mutually beneficial partnerships that cooperation between Abu Dhabi and Israel will bring. Building on ADIO’s efforts to strengthen ties with the opening of our Israel office to facilitate new partnerships, we will continue supporting Israeli businesses seeking international growth by connecting them to strategic opportunities in Abu Dhabi and beyond.”

“Since the signing of the Abraham Accords, Start-Up Nation Central has made nurturing ties with the UAE one of its cornerstone missions. We believe in the potential of innovation to form solid international relations,” said Start-Up Nation Central CEO Avi Hasson. “Combining Israeli technologies with the Emirati innovative and entrepreneurial mindset, as strongly supported by ADGM, can further entrench business ties and though those deepen the people-to-people ties that form the foundation of bilateral relations. “

The Abraham Accord was one of the first steps to showcase and facilitate access to commercial opportunities in the UAE. Along with the partnership between ADGM and the Israeli Corporation Authority on business registrations and hosting a delegation of VIPs and business leaders from Israel, it also saw the milestone licensing of the first Israeli venture capital firm, OurCrowd Arabia becoming a part of the ADGM ecosystem with one of its main focus being fintech.

The UAE and Israeli governments have followed up with another landmark agreement through the signing of the Comprehensive Economic Partnership Agreement (CEPA) in May 2022, which focusses on advancing bilateral trade beyond USD 10 billion in 5 years and adding 1.9 billion to the UAE’s GDP by 2030.

ADGM aims to further leverage the synergies between the respective jurisdictions across the high potential areas such as fintech and entrepreneurship, as well as each jurisdiction’s progressive regulatory frameworks, to facilitate mutual growth.