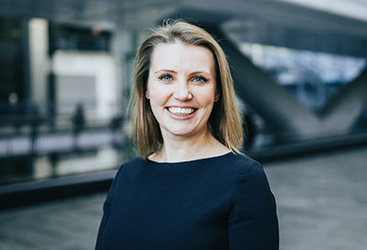 Anastasia Dokuchaeva is a seasoned professional with expertise and a proven track record delivering regulatory technology solutions to the financial services industry.

In her role as Head of Partnerships at ClauseMatch, she looks after strategic product development and projects around recent and upcoming regulations, including regulatory change management, end-to-end compliance management automation, digital regulation.

Anastasia is a frequent expert speaker at industry events. She was twice recognised by Innovate Finance Women in Fintech Powerlist. Andrius is leading business development activities at Anglo-Gulf Trade Bank (AGTB). Driven by the passion for innovation in corporate banking and client experience, he is managing a wide range of AGTB’s strategic initiatives - from partnerships and digital channels development to business planning and new product rollouts.

Prior to joining AGTB, Andrius was with the Boston Consulting Group, in strategic advisory projects across the GCC region. Before moving to the Middle East, he had a successful career in sales & trading at a major Swedish bank - Swedbank, starting his career as a trader and moving to senior business development roles, building and expanding financial derivatives business across the Baltic states and Scandinavia. Barry West joined the Financial Services Regulatory Authority (FSRA) of Abu Dhabi Global Market (ADGM) in April 2018. As Head of Emerging Technology, Barry leads the exploration, design and implementation of ADGM’s FinTech strategy and initiatives focusing on equipping the Regulator with tools necessary to be effective in the digital age. He is instrumental in the creation and execution of projects such as the ‘Digital Lab’ (an online platform which enables Regulators, Financial Institutions and FinTechs to rapidly experiment and prototype in a controlled environment) as well as ‘Digital Regulations’ (an initiative that’s using natural language processing (NLP), machine learning and graph analysis to convert the current analogue regulation into a more fluid digital medium).

Prior to joining the FSRA, Barry was a founding member of the U.K Financial Conduct Authority’s RegTech team running hackathon's (TechSprints) and RegTech focused initiatives.

Emmanuel Givanakis is the Senior Executive Director of the Policy & Legal Division at the Financial Services Regulatory Authority (FSRA) at Abu Dhabi Global Market (ADGM). Under this division, he is responsible for the Policy, Legal and Enforcement teams for the financial services regulator.

Emmanuel joined ADGM in October 2014 as the Head of Policy & Legal, overseeing the establishment of ADGM’s legislative framework, which was a pivotal step in the creation of ADGM as an international financial center. In addition to his remit, Emmanuel manages the enforcement function of the FSRA. Gabrielle joined the Financial Services Regulatory Authority (FSRA) of Abu Dhabi Global Market (ADGM) in February 2021. As Head of Market Development in the Financial Technology & Innovation unit, she drives the relationship between financial institutions, venture capital firms and FinTech startups, along with contributing to the FSRA’s FinTech strategy. Her expertise includes the implementation of new technologies and business models within financial institutions.

Gabrielle is a frequent speaker at leading conferences (e.g. Financial Times Live, Money2020, Finovate), has authored a number of whitepapers and articles on innovation in the financial industry (e.g. Forbes ME) and has been featured in Innovate Finance's Women In Fintech Powerlist in 2017, 2018, 2019 and Lattice80's 100 Women in Fintech in 2018 & 2019.

Founder and Managing Partner of +VC

Hasan Haider has over 10 years of experience investing in MENA startups. Hasan is the Founder and Managing Partner of +VC, an early stage venture capital firm focused on the MENA region. Hasan was previously Managing Partner, MENA at 500 Startups and led the firms growth in the MENA Region over the last 5 years, turning 500 Startups into the most active VC fund in the MENA region, raising and deploying the 500 Falcons fund, building partnerships and running programs in the region to help build the regional ecosystem. Hasan has invested in more than 180 startups in the region over the course of the last 10 years.

Prior to 500, Hasan was the co-founder and CEO of Tenmou, the first business angel’s organization in Bahrain and one of the first in the MENA region. Hasan’s work in developing angel investment in emerging markets through Tenmou has been picked up as a case study by the World Bank and was taught to Entrepreneurship Policy makers at Babson College. Previously, Hasan’s career was in finance and investment banking at Sico where he spent a number of years.

Issa's career has focused on finance and investments for the past 16+ years with a focus on Venture Capital. He started his career in investment banking and transitioned into the MENA Venture Capital space in 2006 as a founding member of Accelerator technologies, one of the first venture funds in the Arab world. He has since occupied numerous roles that include M&A consultant at Yahoo!, Head of Investment at N2V - a regional Venture Builder, and Head of Investments and Venture Capital at twofour54. Prior to establishing Access Bridge Ventures, Issa headed IFC’s Middle East, North Africa, Pakistan and Europe’s venture investments both from a Direct and Indirect (accelerators and fund of fund) perspective.

His track record includes, having invested in 65+ direct and indirect investment deals (from $100K to $25M per transaction), managed over $150m in MENA Venture funds, launched the UAE’s first Accelerator, exited 6+ MENA based deals, supported with 2 IPOs and much more.

Jad is the Founder and Managing Partner of Phoenician Funds, More Capital SAL’s venture capital arm. He currently manages the day to day operations of the firm including the end to end investment process (deal sourcing, screening, transaction execution, portfolio monitoring and exit), team and capability building, communication and investor relations. He co-led the execution of 20+ venture capital investments in MENA, and Europe.

Prior to launching the Fund, Jad worked for over 10 years in advisory and banking, and has experience in MENA, Europe and Asia with bulge bracket institutions (e.g., McKinsey, Booz & Co., J.P. Morgan). During that time, Jad advised more than 15 institutions (SWFs, investment companies, banks/regulators) on strategy design and execution, digitization, launching new businesses and ventures, international expansion, investment strategy, operating model and governance, mergers and acquisitions.

Jad has worked across the globe including in the GCC, Turkey, Levant, North Africa and South East Asia, covering a variety of topics such as venture capital, private equity, investment banking, strategy, organization and governance, implementation and execution, as well as business and technology setup.

Jad is also a director at More Capital, a financial institution licensed by Banque du Liban, and Phoenician Invest Ltd. He holds a Master’s degree from ESCP Europe and a Bachelor’s degree from the American University of Beirut. 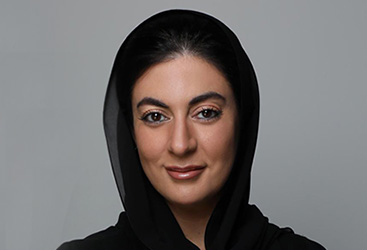 Ruba Al Hassan serves as Acting Director General of Government Affairs at the Abu Dhabi Department of Finance. With over 20 years of experience working for the federal, local and private sector, as well as the United Nations in the UAE and the U.S., she is an expert in public policy, socioeconomic reform, government transformation and cultivating knowledge-based ecosystems.

Prior to her role at the Abu Dhabi Department of Finance, Ruba held various leadership positions including Executive Director of Ghadan21 at the Abu Dhabi Executive Office, delivering measurable impact in support of Abu Dhabi’s transition towards a knowledge-based economy.

She also served as Acting Undersecretary at the UAE Ministry of Culture and Knowledge Development where she was responsible for developing and implementing a nation-wide strategy to promote the UAE as a creative and cultural hub. While in the U.S., she was Senior Advisor to the UAE Ambassador in Washington D.C., where she spearheaded UAE-U.S. partnerships in technology, education, and entrepreneurship with Harvard, Massachusetts Institute of Technology (MIT) and Google among others. Additionally, Ruba served as an Advisor at the Abu Dhabi Crown Prince Court and at the General Secretariat of the Executive Council, as well as the Abu Dhabi Government Restructuring Committee. She also worked with the United Nations Development Programme on key social portfolios, after transitioning from a private sector career as a banker with HSBC Bank.

Loves challenges, to make the unknown- known and the true grit of entrepreneurship. specialize in Identity and compliance management for the financial world, I am most intrigued about Identity management solutions and the effect it has on financial inclusion and money movement. Prior to co-founding TenureX, Izhar held leadership positions in various startups. He was the CEO at Scanovate, a compliance and identity management platform, and was the Vice President of Business Development at Fishman Holdings, a holding group that invests in companies in the fields of technological innovation, Internet, logistics, finance, and services.

Izhar holds a Bachelor’s in Law & Business Administration from the Interdisciplinary Centre (IDC).